, (GLOBE NEWSWIRE) -- , the world’s highest distillery and most awarded craft distillery in the , celebrates two Double Gold and one Gold medal at the 2022 , the largest spirits competition in the world. With approximately 5,000 spirits submitted for evaluation, a total of 70 judges from around the world awarded Double Gold medals to both and Breckenridge PX Sherry Cask Finish and Gold to Breckenridge Port Cask Finish.

“My goal when I started the distillery was to make whiskey I liked to drink,” says , founder, and CEO of . “Nearly 14 years later, we’re making a wide range of spirits that appeal to a wide range of palates and are being awarded internationally with honors like Double Gold and Gold. It’s a huge honor to be recognized on a global stage by some of the most coveted industry experts.”

A photo accompanying this announcement is available at https://www.globenewswire.com/NewsRoom/AttachmentNg/48ac652f-1b7a-4d31-ab98-37e69fd23fc3

About
is based in and is a subsidiary of (“ (NASDAQ | TSX: TLRY), a leading global cannabis-lifestyle and consumer packaged goods company inspiring and empowering the worldwide community to live their very best life. Founded in 2008, the is the “World’s ,” and is most widely known for its blended bourbon whiskey, a high-rye mash American-style whiskey. Their is one of the most highly awarded craft bourbons in the US.

is proudly a 3x Icons of Whisky and 5x winner of Best American Blended winner at the World Whiskies Awards by and a 4x winner of of the Year by the . Most recently, their was named 2021 World’s Best Compound Gin at the World Gin Awards by .

is more than award-winning spirits, offering an immersive guest experience. Dine at their award-winning restaurant, enjoy show-stopping cocktails, learn about their highly awarded spirits with an in-depth tasting and get an inside look at their active production facility. New to the distillery, guests have the opportunity to blend their own whiskey as you learn the inner workings of whiskey production. How it all came to be, however, stems from a mix of just the right ingredients, a hint of luck and a deep love for quality whiskey.

For more information about , visit www.breckenridgedistillery.com. Follow Breckenridge on Instagram @breckdistillery and become a fan at facebook.com/BreckDistillery.

For more information about , visit www.tilray.com 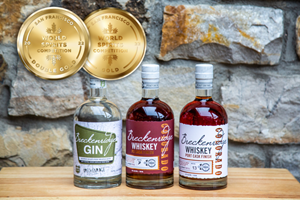